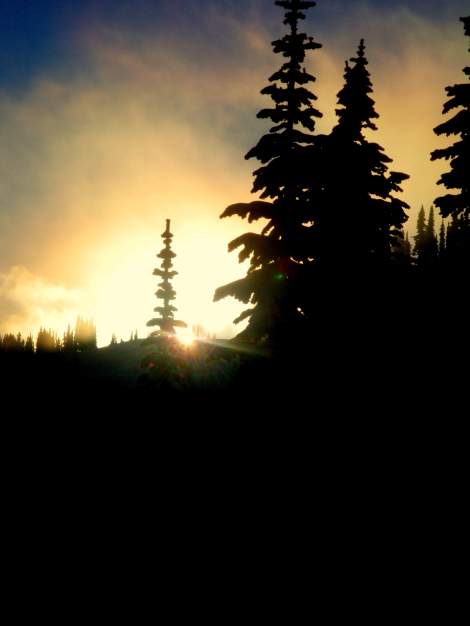 It’s dark, cold, snowing and getting late, we are lost, well we are kinda of lost. We are on our way into a cabin that we have GPS coordinates for but we are in the most deceiving treed terrain that you can think of! We resort to checking the GPS every 100 ft, at times we are so disoriented we are facing the complete wrong direction. 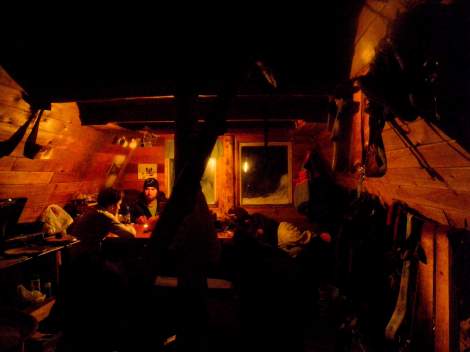 Rewind a couple of hours earlier, a couple of good friends (Rob, Harly, Gord and Emma) have decided to come along on a harebrain scheme that we cooked up over the holidays. We have booked a cabin for two nights but people are working and skiing on the day of the first night. Supposedly the cabin is pretty easy to find (a 15km sled ride to a 1hr tour in), we are all fairly knowledgeable individuals so we figure, what the heck we can just go in at night. This will just add to the sense of adventure especially since no one has made this trek even in the daylight. We pack up our stuff grab a quick delicious burger at the Big Eddy Pub and make our way to the trailhead by 4 pm, it’s already dark. By five we are pulling out of the trailhead, sleds packed and skiers in tow. The first part of the journey goes relatively uneventful, one pull cord and a couple of clutch starts later we make it to the touring portion of the trip. I go to turn the sled around and proceed to get it stuck in a ditch. Well at least its out of the way. 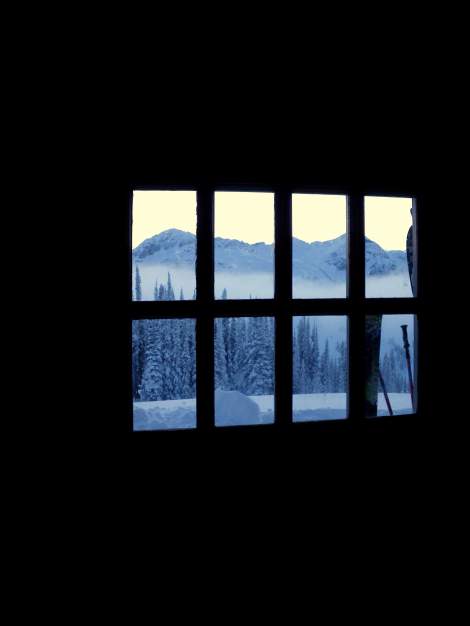 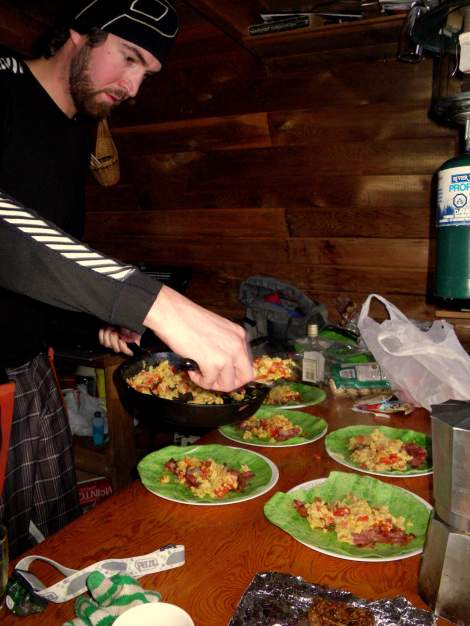 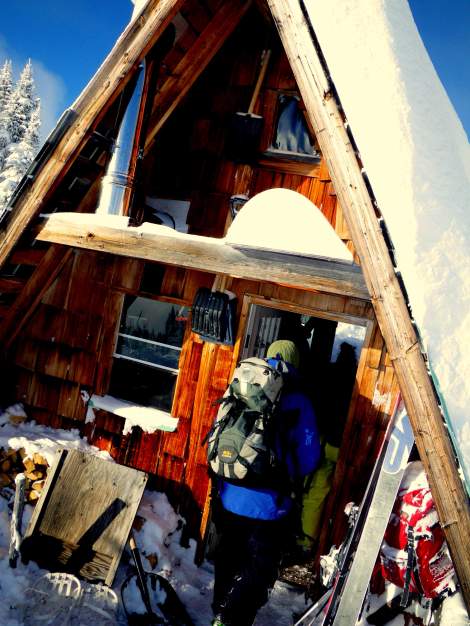 I really want one of these

We don our skis and skins, load up our heavy backpacks laden with delicious food and  some tasty adult bevies! It’s only an hour skin in, we didn’t exactly pack light. An hour later we are still much closer to the sleds than the cabin, all I can think about is, how easy it seemed on Google earth. Maybe this wasn’t such a good idea after all. After our fifth stop in the last half hour, enthusiasm is dwindling. “Alright lets go for another 10 min and if it doesn’t get better we turn around” I say! Finally we get on a recognizable ridge and make some progress. The progress is still slow due to heavy packs and 30 to 40cm trail breaking. We make our way up the ridge and when we reach the right elevation we contour right to reach another ridge. At this point our 1 hr mission  has taken 3hrs. According to our GPS the cabin should be right at the bottom of this ridge. It is no more than a 200M slope down but in the dark it looks huge. Skiing off down into the dark abyss, not really sure if the cabin is down there, is a daunting decision to say the least. Its cold and windy on the ridge and the sleds are even further away so we say “screw it” and drop down. I drop down first, I hit the flats and see a dark shape looming in the distance. As I get closer it takes shape into something that resembles a cabin. I want to make damn sure that it is before I yell back to my friends, It is! I let out some serious cries of joy and excitement. In no time my friends join me and  are rushing inside to make a fire and get the chill out of the body. I can pretty safely say this has been one of the happiest I have ever been to see a cabin! I had visions of wandering around in circles trying to find a tiny little cabin next to a clump of trees. The cabin heats up quickly and everyone relaxes in the warmth and toasts to the start of another great adventure. We head to bed exhausted from the days events, with grand hopes of a great day of skiing. 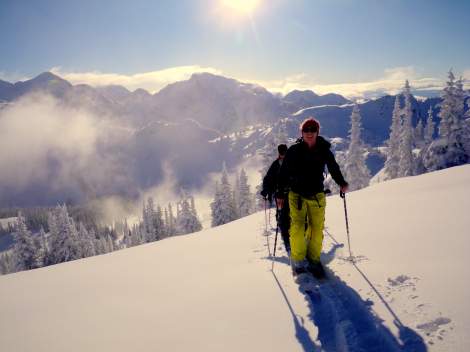 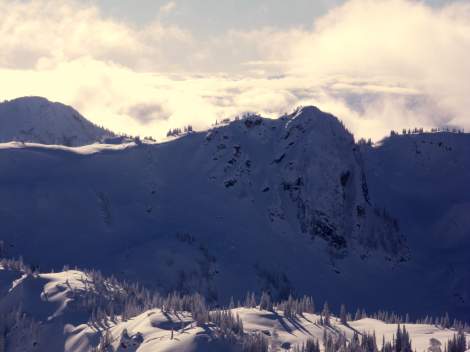 We gingerly get out of bed in the morning, get the fire and breakfast going. The sun is coming and going with the rising and falling of the valley fog, none the less the day looks very promising. We tour up behind the cabin to the high point on the ridge to get our bearings. We climb above the clouds to a breathtaking  view peaks  poking their heads out of a sea of clouds.  We look across the valley to some tantalizing lines that need some tracks laid down on them. We head down for some creamy pow turns in the sun. We tentatively make our way through the terrain, everything looks and feels bomber but the feeling of being way out there can not be escaped. The line we spied from afar looks good to go ! We drop into deep perfect Selkirk powder, the hoots and hollers are made with growing satisfaction. One more run on the way out and we are back to the cabin. Time to get the fire started, glasses filled, dinner made and hey maybe there was even some time for some late night tobogganing! 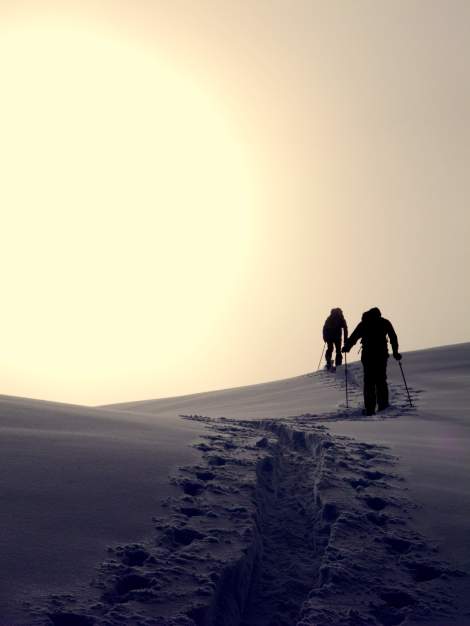 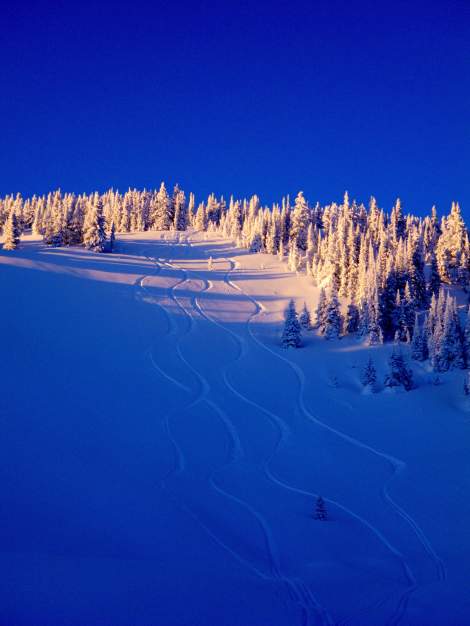 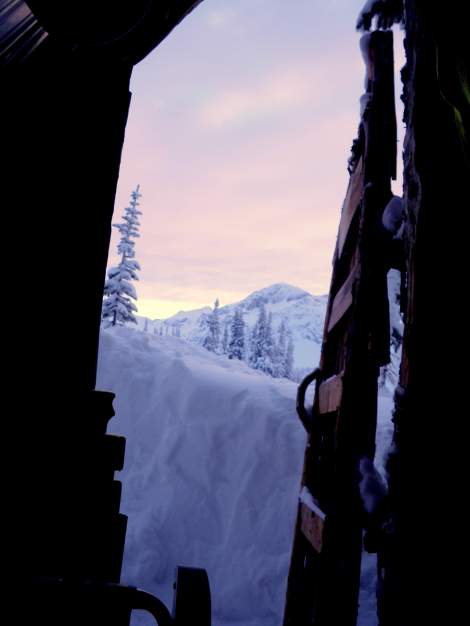 A nice place for a poop

Getting away from the hustle and bustle of normal life even for two days is rejuvenating. Chopping wood, melting snow for water, staying warm and enjoying the quiet peaceful nature of the mountains takes precedence over computers and cell phones. The cabin trip is a quick one but it services its purpose well. A great adventure, good friends, good food, good drinks, great skiing , a great real life rejuvenator! 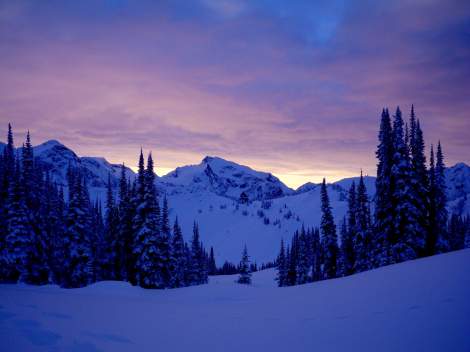