Right now I am working with Greg Hill (click to check out his amazing blog) at his parents house. While it is kinda of torturous working in the winter, this is the longest  either of us have ever worked for ( i know poor us )! It is a great job, all day all we talk about is skiing, I try and think of all the questions I can ask the legend because he has been there done that to just about every rad mountain near Revelstoke. I mean sure there are thousands more of them around here but he has certainly put his mark on a lot of them.

Monday morning starts off just like any other morning. The thing that is different is we both know the next day is going to be blue. With a huge amount of snow in the last month and relatively stable avalanche conditions we were stoked! There is a little mist of anticipation in the air. We spent most of the day discussing where to go. After four winters of skiing in Revy I finally get to go touring with the guy. Stoked. The only funny, no wait hilarious part is that I will still be on trekkers. That is right the plan was to go touring with Greg Hill, Mr Million Vertical feet, on trekkers. I figured I had been out enough that with a little suffering I would be able to keep up. 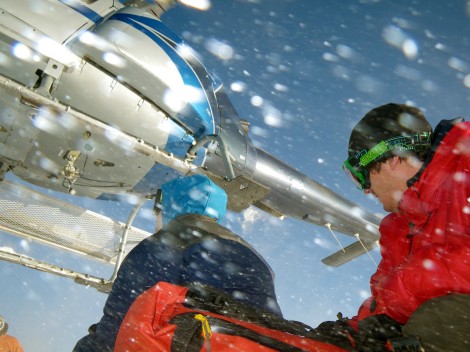 Joey and Hill getting dropped off

Anyway the decision was made to get a heli drop on one of the peaks around Revelstoke, Greg organized the heli and put a crew together consisting of Joey Voesburgh, Dave Sprool, Chris Dellworth and myself. These guys regulars with Greg and put in some insane days of touring with each other. This crew has the mountain skills to make most others feel small and insecure!

Hill filming Dave trying to find the entrance to the chute. Notice the black tar on Hills hands, he went for a couple hours of work before we headed up! A bit of a madman!

The hopes to say the least were very high. I can still remember my famous last words on the ride up in the heli.” I think the snow is going to be great guys the high pressure seemed to come in with very little wind”. As we flew up it started to become more obvious that there may have been a little wind with the high pressure moving in. Most of the storms lately have been coming in from the southwest so we knew that, that aspect might be a little wind effected but I don’t think anyone expected the conditions we experienced! The wind started from the south-west and then when the high pressure came in the wind wrapped around to the north and raped almost all aspects of their snow. This became very obvious after about 10 minutes of skiing around looking at stuff. We opted for some mellow tree skiing, which was better but still had a crust on it. We did two runs of trees and came back up to the ridge that we started on. Greg had been google earthing a chute that dropped down the North face of the ridge. I knew the exact chute that he was talking about and have looked over at it for years. By the time we reached the ridge some valley fog had rolled in and it was hard to see what we were looking down into. After about half an hour of looking and prodding for the chute we found the top of it. After throwing some big rocks into it to test the snow we decided to give it a shot. Greg dropped in first, we all watched eager to see what we were getting ourselves into! His first turn he bounced and chattered down some very hard snow. The snow left something to be desired but it wasn’t moving anywhere. It was an amazing chute to ski, probably never been skied before and very walled in. The skiing wasn’t the best but it was so rad just to ski it. 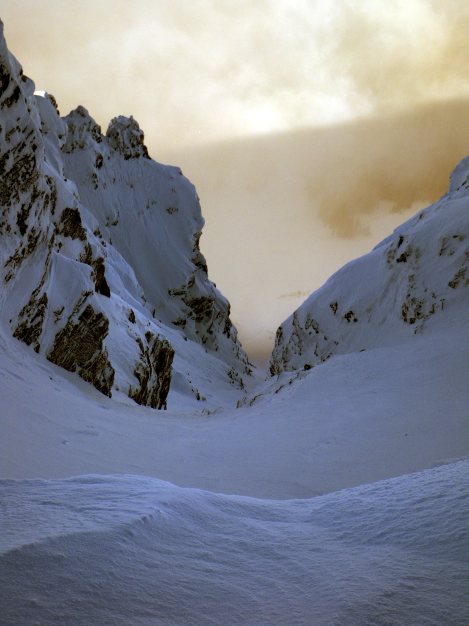 We met up at the bottom and started the long tour back to where we started. We made it back to where we got dropped and got a beautiful 5000″ shot back to town. All in all a great day. I felt fortunate to be invited on such a great day and didn’t slow the group down on my trekkers. I think it is time to get a new touring set up.

The whole day was great, I got to check out a zone that I hadn’t been to before and hang with a bunch of rad dudes. Seems to me this what skiing is all about. Happy Shredding